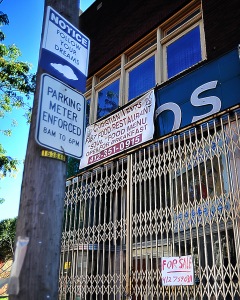 BRADDOCK PA- Sept 24, 2013- The City of Braddock has struggled to stay alive after the fall of the steel industry in the 1980s. Most of the downtown has become a business desert. Even the restaurants have all closed and the city has given notice that residents may find hope in following their dreams to leave poverty and perhaps their home. Braddock was the historical site of the Carnegie Furnace, a segregated blacks-only foundary that was the first of the industry to close when the steel industry collapsed. The city has never recovered and holds one of the highest unemployment rates in the country and one of the more densly populated black populations in the country. Meanwhile, across the bridge in Homestead, a predominantly diverse immigrant white population has worked hard to revitalize itself with state funds and bring business back into the community.

Essays and Stories of Progress Not Perfection

You can bring a horse to water but they have to choose to be happy.

The Blogging of Brooke Gallagher